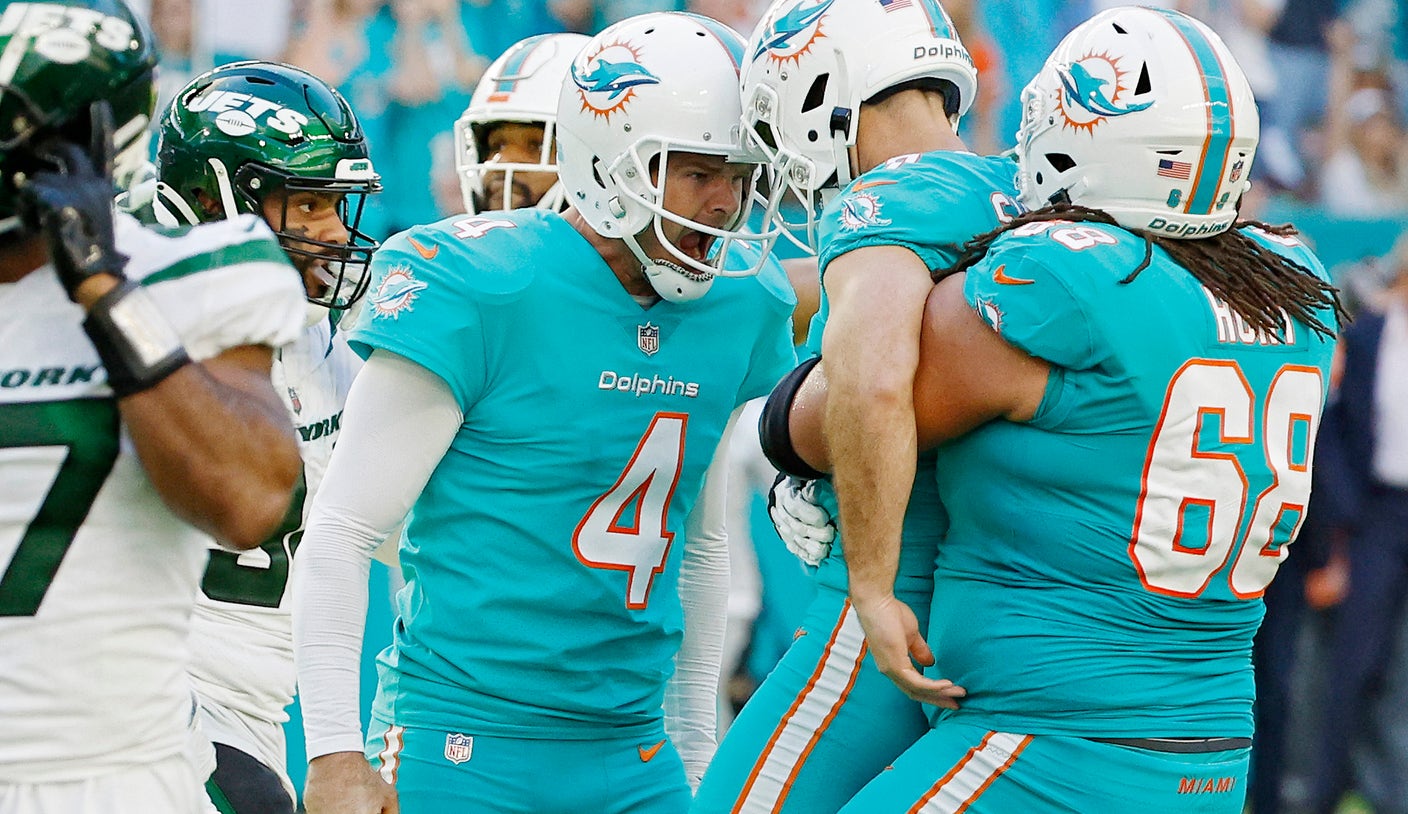 The Miami Dolphins did enough on a day when play on the field didn’t exactly reflect the stakes.

“Enough” is the keyword, because it was neither an impressive performance nor a memorable game. What might be memorable was Jason Sanders’ 50-yard field goal, which was seconds to play, parting the posts perfectly and putting the Dolphins to a 9-6 lead. Thirty seconds later, a safety on a doomed sidegame gave them an 11-6 win – an odd end result that echoes an odd season finale.

It was ugly, but it was enough to end a five-game losing streak and send Miami into the playoffs for the first time in six years.

“It’s been a goal of ours all year,” said Skylar Thompson, a third-line quarterback who was forced into the starting XI by injuries. “We’ve had a lot of ups and downs – some tough times, some really good times. I’m so proud of this team, the way we came together last week.”

Yes, the Dolphins emerge victorious from a deadlock of three teams battling for seventh and final spot in the AFC playoffs. On an emotional day in Buffalo, the Bills defeated the Patriots to open the door for their division rivals. After that door opened a crack, the Dolphins stepped right through and set up a third play by Bills-Dolphins in the playoffs next week after the two teams split the season series.

The question is what comes next. Tua Tagovailoa’s status has been shrouded in uncertainty since reporting a concussion following their 26-20 loss to Green Bay on Christmas Day. There will certainly be speculation as to whether he can return for the playoffs – or whether he would be wise to do so after suffering multiple concussions earlier this season.

The same applies to the typical backup teddy Bridgewater, who is struggling with a small dislocation in his throwing hand.

For a franchise that’s grappled with quarterback speculation all season, things should feel familiar leading up to the Buffalo trip.

It all sounds very epic and very important – which underscores quite comically that this actual game was anything but. It’s not hard to say that the Dolphins and Jets just played one of the most memorable games of this entire 2022 season.

On one side was Thompson, a rookie draft pick who was making his second career start since Teddy Bridgewater was also injured shortly after Tagovailoa. On the other hand, Joe Flacco, who may be making his final start after a 15-year career and a game of quarterback music chairs during a disappointing Jets season.

The game reflected this simple paragraph. Trying to protect Thompson as best they could, the Dolphins relied heavily on their ground play and asked Raheem Mostert and Jeff Wilson Jr. to carry the load, covering 162 yards on 32 combined carries.

It worked well enough, albeit in stark contrast to the Season of the Dolphins storyline. Gone were the quick shots and explosive plays as Jaylen Waddle and a hobbling Tyreek Hill combined for seven catches and 67 yards. When Miami managed to drive down the field, which rarely happened, it came in the form of 10- and 15-game possessions — the kind that bleed minutes by the clock and lead to field-goal attempts.

As bleak as it may have been, the Jets must have been jealous. Flacco has made a valiant effort in the face of the complete lack of a working running game. But throwing the ball to rookie wideout Garrett Wilson was literally New York’s only strategy that worked. Wilson was the only Jets receiver to finish with more than two catches, rushing for 89 yards on a whopping nine grabs.

Memorable, no. But luckily for the dolphins, it didn’t have to be. It was enough to keep the season going for at least another week. And as they try to set the stage for better playoff performance, they have Skylar Thompson and a gritty, ugly performance to thank for their postseason presence.

David Helman covers the Dallas Cowboys for FOX Sports. He previously spent nine seasons covering the Cowboys for the team’s official website. In 2018, he won a regional Emmy for his role in the production of “Dak Prescott: A Family Reunion,” about the Mississippi state quarterback’s time. Follow him on Twitter at @davidhelman_.