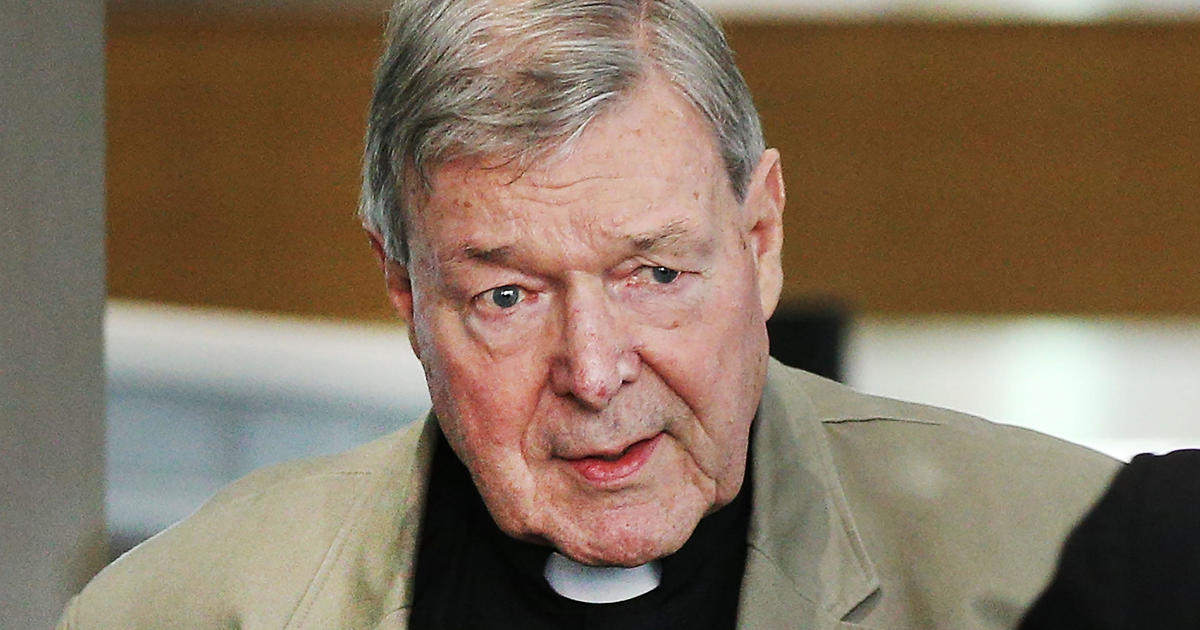 Rome – Cardinal George Pell, a former financial advisor to Pope Francis, who previously spent 404 days in solitary confinement in his native Australia his child molestation convictions were overturned, has died at the age of 81.

He was a divisive figure. He lived to see Vatican rivals charged with financial crimes after he worked to reform the Holy See’s finances. In Australia, he was a lightning rod for disagreements over whether the Catholic Church was properly held accountable for historic child abuse.

“It will be for historians to assess its impact on Church life in Australia and beyond, but it was significant and will be long lasting,” Fisher said.

“This will be a difficult day for many people, especially Catholics, and I send my condolences to all who are mourning today,” Australian Prime Minister Anthony Albanese said.

Fisher said a requiem for Pell would be held in St. Peter’s Basilica in the Vatican in the next few days and in time his body would be returned to Australia for a funeral mass and buried in the crypt of St Mary’s Cathedral in Sydney.

Journalist Lucie Morris-Marr, who wrote the book Fallen about Pell’s trial, said on Twitter that Pell’s death “makes a difference for many Australians affected by the sexual abuse of Catholic children, and not just for those involved in his trial involved will have a terrible trigger”.

Pell, the former archbishop of Melbourne and Sydney, became the third highest official in the Vatican after Pope Francis tapped him 2014 to become the Holy See’s first-ever finance czar to reform the Vatican’s notoriously opaque finances.

For three years he was prefect of the newly created Economic Secretariat, where he tried to enforce international budgetary, accounting and transparency standards.

But Pell returned to Australia in 2017 to clear his name over child abuse allegations from his time as archbishop.

A Victoria State County Court jury convicted him of molesting two 13-year-old choirboys at St Patrick’s Cathedral in the late 1990s, shortly after he became Archbishop of Melbourne. A first trial had ended in a jury deadlock. Pell served 404 days in solitary confinement before the High Court unanimously overturned his convictions on appeal in 2020.

The Supreme Court found that there was reasonable doubt about the testimony of the key witness, now the father of a young family in his 30s, who said Pell molested him and another choirboy.

During his time in prison, Pell kept a journal in which he documented everything from his prayers and scripture readings to his conversations with visiting clergymen and the jailers. The diary turned into a triptych, “Prison Journal”, the proceeds of which went to pay his considerable legal fees.

In the journal, Pell reflected on the nature of suffering, Pope Francis’ papacy and the humiliations of solitary confinement as he struggled to clear his name for a crime he claimed never committed.

Pell and his supporters believed he had been made a scapegoat for all the crimes of the Australian Catholic Church’s botched response to clergy sex abuse. Victims and critics say he embodies everything wrong with the church’s handling of the problem, noting in particular a widely shared photo of a young Pell accompanying a notorious abuser, Gerald Risdale, to court.

US survivor group SNAP bitterly lamented that Pell’s “grave wrongdoing is already being ignored and downplayed by the church hierarchy.” He was accused of covering up clerical sex crimes. “His true punishment begins with death,” the group tweeted.

Pell has staunchly denied his own abuse allegations and has repeatedly defended his response to the abuse scandal when he was Bishop and later Archbishop of Melbourne, although he acknowledged that the Catholic hierarchy as a whole had made “enormous mistakes”. He expressed regret over encounters with victims demanding compensation and said he and others in the church had failed in their moral and pastoral responsibilities to them.

Anthony Foster testified in one of Australia’s abuse inquiries that Pell displayed a “sociopathic lack of empathy” when he and his wife sought compensation for their daughters’ abuse.

Even after he was acquitted of the Melbourne charges, Pell’s reputation remained tarnished by the scandal and particularly by his dealings with other priests who abused children and his treatment of victims. Australian investigations concluded that Pell had created a victim compensation scheme primarily to limit the church’s liability and that he was aggressively trying to discourage victims from filing lawsuits.

Australia’s Royal Commission into Institutional Responses to Child Sexual Abuse, the highest form of inquiry in the country, also found that he was aware of clergymen molesting children in the 1970s and had not taken adequate action to address it.

Pell had testified remotely before the Royal Commission in Rome for over four days in 2016, a notable moment in the history of the Church’s reckoning on abuse, which saw a senior Vatican cardinal sit in a hotel conference room and answer questions via video link from 10pm to 2am I’m in the audience every night, with victims, journalists and supporters.

Night hours were set to Australian time zones after Pell argued his heart condition made flying too dangerous. But it had the effect of expanding testimonies that might have been limited to Australia to a global audience.

Pell says he met with Australian survivors who had traveled to Rome to hear him in person. He acknowledged he had not acted on an allegation a decade ago and vowed to work to end the suicide spate in his Australian hometown of Ballarat, where scores of people had taken their own lives as a result of trauma abuse.

“We now know it was one of the worst places in Australia” for child sex crimes, Pell said at the time.

After being blamed by the Royal Commission for failing to take adequate action, Pell said he was surprised by the results and said they were not “supported by evidence”.

With his rather brusque, no-nonsense Australian sensibilities, Pell frequently clashed with the Vatican’s Italian old guard during the years he worked to get a handle on Vatican assets and spending. He was confirmed when Vatican prosecutors tried ten people, including his one-time nemesis, on a series of alleged financial crimes in 2021.

The ongoing trial of Cardinal Angelo Becciu, number two in the Secretariat of State during Pell’s tenure, primarily concerns the office’s €350 million investment in a London real estate deal. Pell’s greatest struggle had been to gain control of the bureau’s portfolio of assets, which remained off the Holy See’s balance sheets and was managed by a few inexperienced monsignors and laymen, who lost tens of millions of euros to the Vatican.

Just last year, almost a decade after Pell first announced that he had uncovered nearly €1 billion in undeclared assets, Francis ordered the Secretariat of State’s entire financial portfolio to be moved to the Vatican’s centralized Patrimony Office, to enable more professional administration and accounting.

After Pell returned to Rome after his 2020 release from prison, he had a well-publicized private audience with Francis.

“He acknowledged what I was trying to do,” Pell said of the Pope during a 2020 interview. “And, you know, I think it’s been sadly confirmed by revelations and developments.”

Francis said so in a recent interview with Italian broadcaster Mediaset, in which he credited Pell with putting the Vatican on the path to financial transparency and lamented that he was forced to abandon efforts to address the “slander” of the Vatican Making allegations of abuse at home.

“It was Pell who determined how we could move forward. He’s a great man and we owe him so much,” Francis said last month.

Pell was born on June 8, 1941, the eldest of three children to a heavyweight boxer and landlord named George Pell, an Anglican. His mother Margaret Lillian (née Burke) came from an Irish Catholic family.

He grew up in the Victorian regional town of Ballarat. At 193 centimeters (6 ft, 4 in) tall, he was a talented Australian rules footballer. He was offered a professional football contract to play for Richmond but opted for seminary instead.

While in Melbourne he set up the Melbourne Response, a world-first protocol to investigate complaints of clergy sex abuse and provide redress to victims. However, many abuse victims have criticized that the system is designed more to protect the church from litigation.

After his convictions were overturned, Pell divided his time between Sydney and Rome, where he participated in the typical life of a retired cardinal, attended Vatican events and liturgical festivals, and otherwise kept abreast of church news.

“I’ve become very Italian,” Pell told a visitor during a coronavirus break he was in Rome.

Pell was also fighting alongside the Archdiocese of Melbourne in Australia with a civil case that lawyers said would continue against Pell’s estate on Wednesday.

This case was brought by the father of a former altar boy who claimed he was sexually abused by Pell. The father claims he suffered mental health effects from the abuse of his son, who died of an accidental drug overdose in 2014.

“A civil trial probably would have provided an opportunity to cross-examine Pell and really test his defense against these allegations,” said Lisa Flynn, Shine Lawyers’ chief legal officer. “There is still a lot of evidence supporting this claim that can be relied upon.